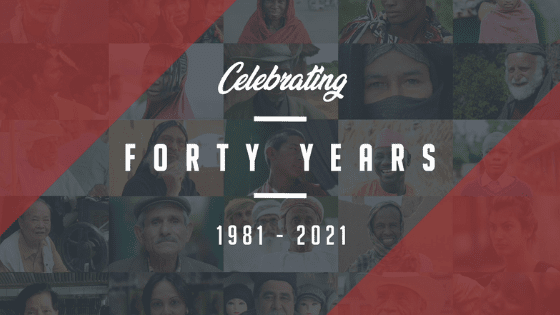 As we enter our 40th year of frontier mission mobilizing ministry, we are reflecting on the goodness and faithfulness of God. Key people, partnerships and events have shaped us into who we are today. We are honored to share our history with you throughout 2021, leading up to our celebration event in Nashville, October 13-14. For more information, visit frontierfellowship.com/40years. 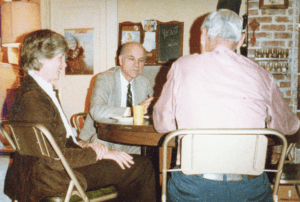 On January 4, 1981, Dr. Ralph Winter and his wife Roberta sat down at the Kurtz family’s kitchen table. Ralph approached long-term missionary Rev. Harold Kurtz with a new idea: to develop a frontier mission movement within the Presbyterian Church. Harold accepted the challenge and began the journey that led to our formation.

While the people have changed and the structure has grown, our two-fold conviction remains the same: God desires to be worshipped by all peoples through culturally unique expressions of faith, and the global Church is called to unity and participation in sharing the Good News of Jesus with those who still have little or no access to that message. Read the full blog post here.

Our founder, Dr. Ralph Winter, gave a famous speech at the 1974 Lausanne Congress. He sounded a call for the Church to engage with the frontier and help reach the “hidden peoples” living around the globe.

Winter maintained that the frontier went beyond national borders, and unless someone crossed over linguistic and cultural barriers as well, these hidden peoples would likely never hear the Good News of Jesus. This call woke up the Church to frontier mission, and paved the way for Frontier Fellowship to form deep relationships with congregations throughout the US. 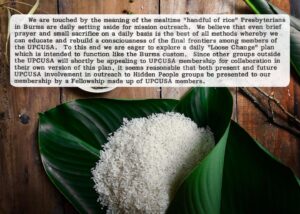 In the late 19th century, followers of Jesus on the India/Burma border began the practice of setting aside a handful of uncooked rice at every meal. At the end of the week, the rice would be sold at market and the funds would be used to support local church planters.

Frontier Fellowship’s original statement of purpose—reported to the 193rd General Assembly of the United Presbyterian Church in 1981—identified this practice as an example American Christians could follow. By setting aside loose change at each meal, funds and prayers could be generated for God’s work on the frontier. We thank God for using the Mizo people, and their daily discipline of generosity, to help form Frontier Fellowship’s identity as we educate and inspire Christians to engage in bringing the Good News of Jesus to the world’s least-reached people groups. Read the full statement of purpose here. 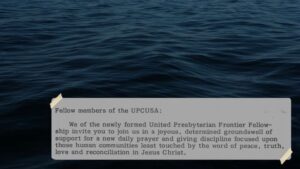 Shortly after our first Statement of Purpose was issued at the 1981 General Assembly of the Presbyterian Church, our founder Ralph Winter issued an open letter to congregations nationwide. He appealed directly to the Church and invited them to join “a joyous, determined groundswell of support” towards the frontier. Read the open letter here.