The Kitchen Table + Beyond
Jan 01 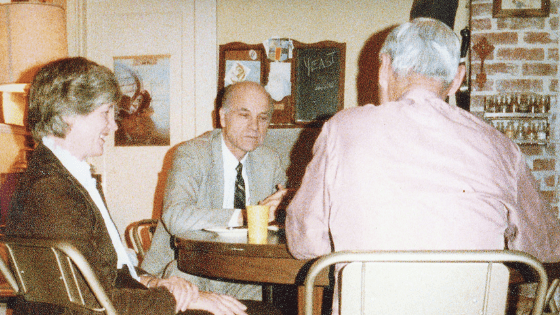 The Kitchen Table + Beyond

On January 4, 1981, Ralph and Roberta Winter sat down with Harold Kurtz at the kitchen table in his Portland home. They were there on a mission to persuade and recruit him for a frontier mission movement beginning among US churches.

Years earlier, Winter learned from his Fuller Seminary colleague Donald McGavran that castes in India prevented people from engaging in Gospel witness with their near neighbors. He reasoned that many peoples were effectively hidden from the Church by ethnic and language barriers, and that followers of Jesus must learn to cross frontiers in order to reach them with the Good News.

In 1974, at the Lausanne Congress on World Evangelization, Dr. Winter delivered a groundbreaking speech titled “A New Macedonia.” In it, he made the case for re-thinking world evangelization as a matter of paying attention to ethno-linguistic people groups. Sharing the Gospel needed anthropological and linguistic focus beyond simply sending mission workers to nation-states. To reach several billion unreached peoples with the Gospel, the whole Church would need to get involved.

The Winters visited Harold that first Sunday night in 1981 believing he was the right person to develop a frontier mission movement within the Presbyterian Church. There was no one like Harold in the denomination at that time. He not only had the passion for unreached people groups and 22 years of experience as a missionary on the frontier in Ethiopia, but he also had a winsome personality and held the respect of denominational leaders.

Harold would later recount this meeting by saying, “Ralph nailed me to the wall.” He accepted the challenge and began the journey that led to the formation of Presbyterian Frontier Fellowship (now, Frontier Fellowship). Today this movement of Presbyterians has expanded to include more denominations and congregations. We rejoice that the number of unreached and unengaged peoples is smaller now than it was in 1981.

But 40 years later, more than two billion people still lack access to the Gospel. So the work of mobilizing churches to care for those unreached peoples continues. Frontier Fellowship is committed to awakening the western Church to the stark fact that so many peoples lack a Bible or a church or a witness in their midst. We are also committed to partnering with visionary Christians in the Global South who live nearer to these hidden peoples than we do. Mobilizing American churches and partnering with indigenous mission ministries continues to be our calling.

Who would have thought a kitchen table would become such an iconic scene for Americans concerned about frontier mission? Forty years ago, a movement started among Presbyterians when Ralph Winter passed the baton to his friend and fellow missionary, Harold Kurtz. Frontier Fellowship is pleased to welcome in the new year by looking back to that kitchen table and the significant conversation that took place around it. We are grateful for our founder, Dr. Ralph Winter, a missiologist with a pioneering vision. And we give thanks for our first leader, Rev. Harold Kurtz, who took us from the kitchen table to the next people group who might be found just beyond the next hill.

Would you like to hear more about how you can partner with us in this exciting movement? Contact me to schedule a virtual visit!

For every people, an indigenous church. | For every church, a mission vision.