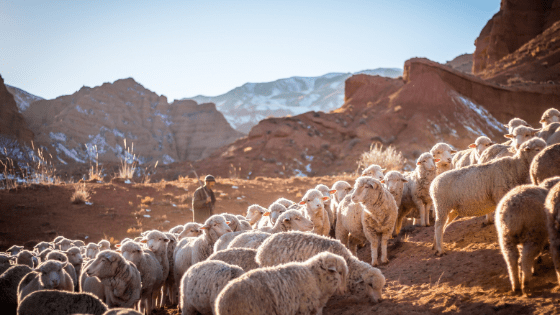 Today I’m thinking about one of the stories of Jesus told about a shepherd who had 100 sheep. One of those sheep went missing. The shepherd went out looking for that one lost sheep. From an economic standpoint, you might think it doesn’t make much sense to leave your 99 sheep and go look for the one missing one. You could just say, “Hey, write off your losses. Be glad you still have the 99. Forget about that one sheep.” But that’s not thinking exactly right. First of all, a shepherd would never leave his 99 sheep unattended. He would leave those 99 sheep in the care of another shepherd. Sheep are what a shepherd lives for. He lives to raise sheep, to sell sheep. Sheep provide wool to make clothing. Sheep provide food when they’re slaughtered. Sheep are everything to a shepherd. As Jesus said, of course that shepherd would go out looking for the one sheep that went astray.

I first met Harold Kurtz when he came to Russia in 1999. He told me, “Donald, we want you to go with us to Siberia. We’re going to have a conference on unreached peoples.” And I thought to myself, What is that? I didn’t know what unreached peoples were. But I soon got an education by traveling with Harold into Siberia.

We started making trips back there every year. We would go there in the winter and visit the reindeer-herding people: the Nenets people. There might be in the whole world 30,000 or 40,000 Nenets people spread over a vast area of Siberia. They live in very small communities. Sometimes, a family of Nenets lives all by themselves in a teepee somewhere in the tundra. More often there are extended families which could consist of three, four or five teepees. I went with Harold by snowmobile and we shared the Gospel.

The first time we went out to one of the teepee villages, we went inside the teepee of a younger woman. Inside the teepee, her mother was sitting there. She looked like she must have been 90 or 100 years old. She was almost crippled. She sat very quietly. Her fingers were knotted. Harold asked a question, “Do the Nenets people have a story of how the world began?”

This old woman, who had been sitting there completely still, perked right up when she heard that question translated into her language. She said, “Yes! We do have a story about how the world began. In the beginning, Num Vesiku (the old man of heaven) took a wife, and people appeared on the earth. In those days, people were considerate of one another. They were kind to one another and helpful. In those days, a poor man came walking into a village one time. And there was in that village a very, very rich man. He had lots and lots of reindeer. The poor man said to the rich man, ‘Give me something to eat.’ The rich man looked at him and said, ‘No. Go away.’ People were shocked! They couldn’t believe that this rich man would turn away a poor, hungry man. They appealed to the rich man. They said, ‘Look, you have so much. Give him something to eat.’ But he refused and said, ‘No. Go away.’ Well, do you know what happened? Num Vesiku sent fire from heaven and struck down the rich man. He killed all of his reindeer and killed his children. From that time, people on earth have been at enmity with one another.”

Harold said, “We have a story in the Bible that in some ways is like your story. We came out to your teepee today to tell you that Jesus has come into the world and has begun to set things right.”

I made other trips to visit the Nenets people. We went by snowmobile and we actually stayed three nights in the teepee of a Nenets woman named Taisia who’d become a follower of Jesus. Those were wonderful times. As we did that, I thought to myself, This is an extravagant thing to do—to come from Moscow on an airplane and then to drive in a jeep and then to go by snowmobile across winter roads at night through the tundra…just to visit a few people living out in teepees. But then I thought about the story Jesus told about the man who went looking for the lost sheep. I saw that the vision of Frontier Fellowship—to bring the Gospel to peoples who have never heard of Jesus Christ—is faithful to the message that Jesus told about the shepherd who went in search of a lost sheep.

I remember one night when we were riding on snowmobiles through the tundra. We stopped, and our Nenets friends who were guiding us on the snowmobiles started looking around. We realized after a minute that we were all lost. That was a little bit of a scary moment.

Have you ever been lost? The Gospel says, and we know it’s true when we look deeper into ourselves, that we’re all lost. But there’s Good News. Jesus has come looking for us, and He’s found us. When He died on the cross for us, He found us. When He rose from the dead on Easter morning, He brought us home to the Father’s house. That’s the Good News that we have to share with the world. God’s love is unlimited—it extends to people of all nations, all tribes, all peoples, all clans!