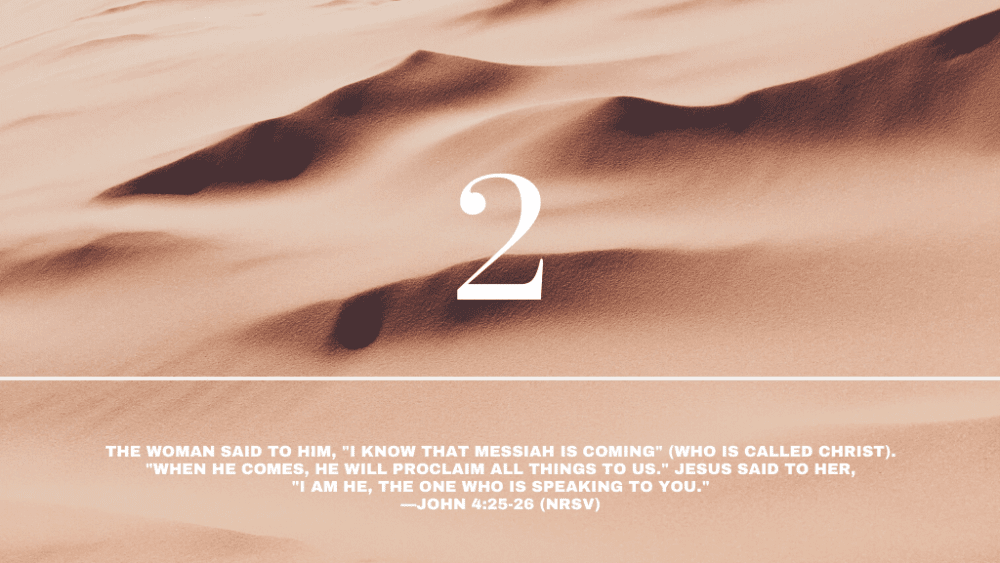 Ancient prophecies foretold the coming of the Messiah (or Christ). He would be the Anointed One of God, the King and Priest who would set all things right in the world. From Herod and the wise men (Matthew 2:1–6) to two criminals on crosses (Luke 23:39–43), people from all walks of life wondered whether or not Jesus was the one.

According to Jewish protocol, the exchange between Jesus and the woman at the well (John 4:1–42) ought never to have happened. Men and women didn’t mix outside of family. And a centuries-old enmity between Jewish people and Samaritans encouraged avoidance at all costs.

Why would Jesus, a respected Jewish rabbi, linger with a Samaritan woman of questionable repute? Could it be He’s the kind of Messiah no one expected, one who turns the status quo upside down? In the radical act of speaking with her, He reveals His Kingdom as the place where divisions are healed, truth is told, grace is extended and outsiders find dignity. The Samaritan woman’s heart opens to respond to a new reality. Could this be the Messiah? She races back to tell her neighbors the Good News.

Today in refugee camps in the Middle East, many Muslims, including imams (religious leaders), are having similar encounters with Jesus. After losing everything, including their occupations and nearly all routines of their normal lives, they often have little else to do but spend their days thinking and talking. The extreme claims and actions of radical Islam have shaken them to the core. Many seek another way and are inquiring about Isa al-Masih (Jesus the Messiah), one of Islam’s most beloved prophets. Who is this Messiah?

As Christian refugees and relief workers engage with them in conversations about Jesus, the Holy Spirit is breathing life and revelation into His name. Like the Samaritan woman, those hearing the Good News of the Messiah can’t wait to tell their communities, and many are responding in faith because of their testimony.

Read Luke 1:76–79. Ask God to show you how to embrace His call to be a messenger of this Good News. How will you help prepare the way for Jesus to be received among the least-reached peoples of the earth?