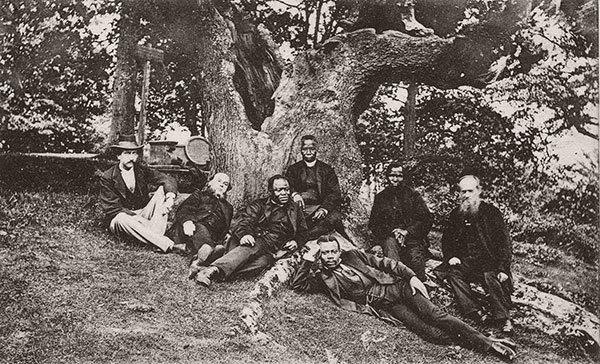 Historian Carter G. Woodson was dedicated to celebrating the incredible contributions made by Black people. In 1926, he, along with the Association for the Study of Negro Life and History, proclaimed the second week of February to be observed as Negro History Week. Fifty years later, Black History Month became a nationally recognized observance when President Gerald Ford urged Americans to honor the US Bicentennial by also celebrating Black History Month.

There are many mission leaders whose accomplishments are often highlighted in congregations nationwide, yet the contributions that Black mission leaders have made are not as frequently shared or celebrated. Black History Month prompts me to remember the many dedicated African and African-American missionary heroes. This year, Missio Nexus—a consortium of mission agencies—features a month-long set of devotional readings highlighting prominent Black mission leaders from the US and the impact they’ve had on the world.

The first day of the devotional series features George Liele, a freed slave from Burke County, Virginia who became the first American missionary. He went to Jamaica in 1782; he started a church there that later reached thousands of Jamaicans. Liele predates the Judsons by 20 years; Adoniram and Ann Judson set sail from Massachusetts in 1812 to go to India before settling in Burma.

The third Black mission leader in the Missio Nexus series is another Virginian, W. H. Sheppard, who completed his theological studies in 1886. He was ordained a Presbyterian minister and later traveled along Africa’s Atlantic coast, preaching the Gospel throughout villages near the mouth of the Congo River. He would later gain international fame for exposing the violent practices of Belgian investment companies and their manipulative politics among Congolese tribes to profit from slave labor.

Not on the list, however, is the name of Samuel Ajayi Crowther (pictured center back in the image above). That omission is simple to explain: he was an African leader, and thus not a part of our American history. But he is a hero to me for his frontier mission efforts.

Born in 1807 in Yoruba, part of modern-day Nigeria, he was captured as a young teen by Fulani and Yoruba Muslim raiders, and eventually sold to Portuguese slave traders. The ship was intercepted by the British navy, and young Crowther found himself in Sierra Leone, where he received a first-rate education at Fourah Bay. The Church Missionary Society (Anglican churches) founded Fourah Bay College in 1827, which offered the first university education in tropical Africa.

Crowther became a village schoolmaster and began studying languages perhaps with an eye on mission service. He joined the Niger Expedition of 1841 and contributed as an interpreter. Anglican ordination, at that time, could only be received from a bishop and no bishop was nearer than London. So he went to England and studied for ordination. During his studies, he published Yoruba Vocabulary, perhaps the first such work by a native speaker of an African language. Crowther became the first African Anglican bishop and was one of the principal translators of the Bible into the Yoruba language.

Crowther’s accomplishments included additional translation work in Igbo and Hausa, two of the predominant languages in Niger. Another triumph was his careful dialogue and witness among Muslims in Upper Niger. The British missiologist, Henry Venn, recognized the strategic opportunity that Crowther’s skills and dedication afforded the missionary movement. He secured the consecration of Crowther as bishop of “the countries of Western Africa beyond the limits of the Queen’s dominions.”

After a stroke, Crowther died in 1891; sadly, a European bishop was appointed to succeed him. In Andrew Walls’ words, “The self-governing church and the indigenization of the episcopate were abandoned.” Crowther’s example and legacy live on, however, and both African Christianity and World Christianity owe much to this humble servant. He is remembered and honored for his translation work, cross-cultural mission efforts, church leadership and pioneering work among Muslims.

When I think about Black History Month, I’m reminded there are many past heroes and historical episodes unknown to me, despite being a student of mission history. Join me in giving thanks for Samuel Crowther, George Liele, W. H. Sheppard and many more Black servants of God’s mission in the world. We have so much to learn from one another in the global Church; I encourage you to use this simple story as a reminder to delve into Black history and learn about the many trailblazers in both African and African-American traditions.