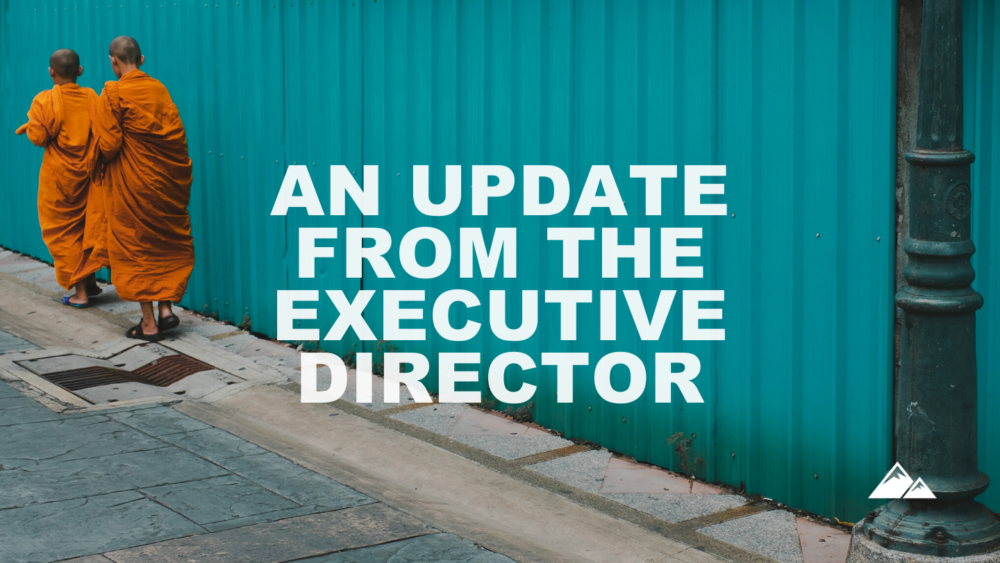 In January, our staff visited the Theravada Buddhist world of Thailand and Myanmar. This was our first international staff retreat in over a decade, a significant venture for Frontier Fellowship as we continue to ask the questions, “What is God doing on the frontier of the Buddhist world?” and “How are we called to participate in helping make the Good News more accessible here?”

Southeast Asia is full of beauty. Vibrant colors of native flora stand out amidst lush green backdrops of dense forest, verdant plains and cultivated rice fields. This loveliness is captured in the culture as well—both the traditional and the modern—in colorful and unique architecture, flavorful food, music, dance and art. It’s hard to overstate how our travels flooded the senses with impressions and now memories.

Buddhism that is practiced here is of the older school, commonly called Theravada (“Original Teaching” or “Doctrine of the Elders”). It strikingly reflects our Western imagination of giant golden stupas, small and giant statues of the Buddha and monks traversing the landscape in their brilliant orange and maroon robes. However, a closer look at the lives of everyday people also uncovers much complexity in beliefs. The animistic world of amulets and spirit-houses dominates daily religious thought for most people. Just as Paul remarked to the Athenians in Acts 17:22, it’s difficult to leave Thailand or Myanmar without proclaiming, “People of Southeast Asia, I see that in every way you are very religious!”

With a few members of our traveling group, I had the opportunity to visit a large village with a local pastor outside of Yangon, Myanmar. The village was poor, primarily comprised of day laborers, and with little infrastructure such that the small thatch houses were elevated as the ground often flooded during monsoon season. The small church was no larger than a semi-trailer, yet nearly 20 people attended regularly. During monsoon season over 30 children were sometimes also packed into the space.

We sat and listened as several followers of Jesus shared their stories. One teenage girl shared how her family regularly prevented her from going to church after she became a Christian, often revoking privileges and forbidding her to attend worship. When we asked why she became a Christian, her answer was clear: “Because this is the Living God!” Everyone in that room shared a similar story—their journey to Christ began when they recognized the Christian God as living, active and powerful. They then grew to know the One who is not only the Living God, but also Creator and Savior.

We’ll be sharing more about our vision trip to Southeast Asia in the upcoming Winter/Spring issue of The Frontier Journal. Pray with us, asking that many more in the Buddhist world will come to know the Living God revealed through Jesus. May people in the rich and vibrant cultures of Southeast Asia join together with all of the peoples of the world to worship Him!

P.S. One of the many amazing stories we heard in Southeast Asia was that of a family serving God in the middle of conflict zones. A documentary about their lives is being aired in select theaters around the US on February 24 and 25. Find tickets here: https://www.fathomevents.com/events/free-burma-rangers

Frontier Fellowship’s ministry relies on the generous financial support of people like you. Help us expand our impact among the world’s least-reached people groups with a contribution today!