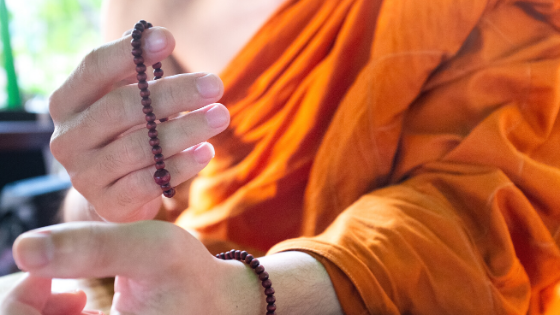 Frontier Fellowship’s staff, along with a board member and some family members, traveled to Thailand and Myanmar in January to discover together how the Good News of Jesus is being made known to people groups in this part of the Buddhist world. Here, Associate Director Rita Johnson shares how a former monk and a college president are sharing the Good News of Jesus with their neighbors.

I spent nearly two weeks in the Southeast Asian nation of Myanmar with the purpose of observing the ministry of Christians there and learning about Buddhism and the peoples, cultures and current issues in the region. The people of Myanmar face a number of challenges including poverty, human and drug trafficking and ethnic conflict. It is these stories of two Buddhist monks that opened insights for me into life and faith in more personal and concrete ways.

I met Yun who is a member of a Presbyterian church in a city in Myanmar and shared his faith journey with us. When he was 68 years old, a retired person from the church came to his simple home and asked, “Do you know Jesus?” Yun, who had been a Buddhist monk for many years, had never heard about Jesus. People from the church kept visiting him and explaining Bible verses to him. Yun likes to read and study, so he borrowed a Bible from the visitors.

Weeks passed before Yun decided that Jesus is the person who can carry you into heaven. (This image is influenced by Yun’s cultural and religious background, where reaching better spiritual places requires climbing towards “heaven.”) He gave his statue of Buddha to the local Buddhist temple. At age 74, Yun now keeps busy visiting neighbors and asking the same question the man from the church asked him six years ago: “Do you know Jesus?” If someone wants to know more, he goes slowly through a verse or two from the Bible. To help people understand, he says that Buddhism is similar to the Old Testament, but the New Testament way of Jesus is the path to heaven.

I met the second monk in a village in another region of the country while visiting a Christian college that has an English language program. One of the students, who is Buddhist, invited several of the Christian staff of the college to her village for a special celebration for the opening of a new monk house (where monks live). As a guest, I went along to eat at the student’s home and meet her family. I watched as the head of the college, a follower of Christ, sat and conversed with the student’s Buddhist father.

Our group then went to the monk house and were invited inside, even upstairs where the monks stay at night. I’ve never seen such happy monks who were pleased people came to their open house celebration. Often, we think of monks as serious: going out with their bowls in the morning to collect donations of food, living very simply or chanting their prayers. But this day the Buddhist monks and the villagers were definitely joyful.

On the ride back into town, I asked the head of the college, Rev. Chun, why he visited a Buddhist event. He said that showing respect is very important in relationships, so he chose to go to the student’s village. In this region and nation where ethnic, political and sometimes religious conflict is present, Christians can be peacemakers via their relationships with Buddhist neighbors.

In what ways can followers of Jesus relate to people of other faiths? What can we learn from these two examples from Myanmar? One disciple was very direct in sharing about Jesus and the Bible. Another disciple chose to be respectfully present at the celebration of villagers of another religious faith. Both discerned that God wants interaction with people outside of their religious and cultural circles. (In both cases, the people involved were of different ethnic backgrounds than the Christian.) Might situational wisdom—along with prayer and the Spirit—guide us when to share boldly from God’s Word and when to simply be present in the lives of others?

In a world where some 87% of Buddhists, Hindus and Muslims don’t know a single follower of Christ, there are countless possibilities for increased interactions. Might God be calling you to take a step to reduce how many people have no opportunity to see a disciple of Jesus living faith as a witness to God’s redemptive love?

Jesus said, ”But you will receive power when the Holy Spirit has come upon you; and you will be my witnesses in Jerusalem, in all Judea and Samaria, and to the ends of the earth.”  —Acts 1:8

Jesus, You became human, taught and healed, died and rose to life so that many would know Your forgiveness and be able to receive the promise of dwelling with You in heaven. Before You send us out, we may not know if our witness about You will be to “the ends of the earth” in another nation, or simply in the next town, our local “Samaria.”  God may Your will be done in us! Amen!

Read more about Frontier Fellowship’s vision trip to Southeast Asia in the spring issue of The Frontier Journal.