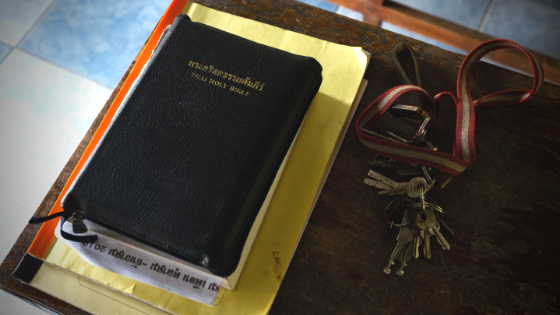 Faithful to All Generations

Frontier Fellowship’s staff, along with a board member and some family members, traveled to Thailand and Myanmar in January to discover together how the Good News of Jesus is being made known to people groups in this part of the Buddhist world. Here, multimedia storyteller and ministry friend Katie Archibald-Woodward shares the story of God’s faithfulness to a family through several generations.

We climbed up a short case of cement stairs and breathed deeply of the fresh morning air. As we rounded the corner, a welcoming patio opened before us, encircled by softly shading trees. A door to a church sanctuary was propped open, beckoning us in.

Entering the church felt like a seamless departure from the outdoors, the gentle early light and verdant exterior still visible through the ceiling-high windows that held in the space. The fan-shaped building was filled with pews, room for hundreds, all oriented toward a prominent cross. I observed people trickling in—settling into pews and pulling out a Bible or preparing themselves in prayer.

I made my way back outside through a different door, passing tall stacks of hymnals whose gold lettering caught the light and beamed radiantly into my eyes. I walked across the courtyard to a gurgling vase-like fountain and watched it softly bubble and settle, then wash over the blue ceramic base, feeling calmed and refreshed by its baptismal presence.

I turned back to the church and spotted a few women greeting congregants. One called out to me and introduced herself. The elder was a bright-faced, poised and self-assured woman dressed in a sleek white outfit. We began to chat about Frontier Fellowship and our group’s delight in joining them for worship that morning. I asked her how long she had been a Christian. She said, “All my life. My family is Christian.” Then she began to retrace the threads of time that had crafted the tapestry of her family’s life in Christ.

The story began with her great, great grandmother, Boonsri. She was a mother of two, and the second wife of her husband. Their community believed his first wife had been involved in witchcraft. When some strange things started to happen to their sons, the village was convinced the first wife’s spirit was possessing them. It soon became clear it was not safe for the family to remain in the village, and Boonsri’s husband sought out help.

He had some connections in northern Thailand who advised him to contact Mr. McGilvary, an American Presbyterian missionary. Daniel McGilvary (1828-1911)—a household name within the Thai Christian community—was a key figure in spreading Protestantism in the region and increasing literacy, particularly among girls. He was also integral in helping foster toleration and civil rights of Christians in northern Thailand. The request of Boonsri’s husband was met by an invitation from Mr. McGilvary to come under his care. There, Boonsri, her husband and two boys found a safe haven and an introduction to Jesus.

The elder’s great grandfather was one of those boys. Now, generations later, her extensive family are followers of Christ. I had the pleasure of meeting a number of them that morning, as they happened to be at church for a rare reunion. During worship they treated us to beautiful music. If I had not known otherwise, I would have thought they were the church choir. They were that day!

I walked away from that conversation struck by how, once again, God brings good out of all things. God works wondrously through experiences of pain and fear, and is stronger than all other powers. My faith has surely stretched and strengthened here. I’ve been opened to the amazing ways God is at work among these beloved people and have been changed forever.

Read more about Frontier Fellowship’s vision trip to Southeast Asia in the spring issue of The Frontier Journal.